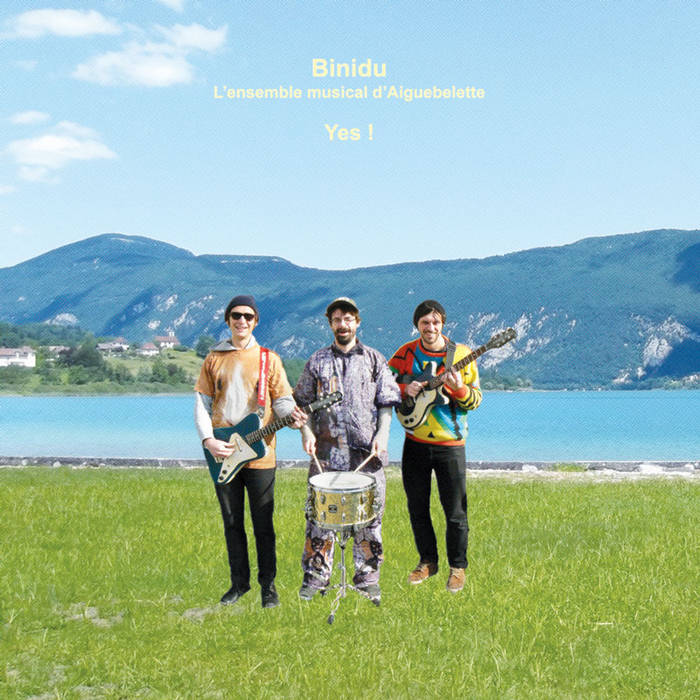 YES LP is sold out.

It is highly important that music musicians occupy a key position at a time when the independent sections from Brittany and Loire valley dedicate their efforts to experimenting on the bamboule concept and develop strong ideas to restore the sovereign power of gentleness such as the « bring-your-own-confetti » or the « put-on your banana costume » policies .
For that purpose, El Kythibong Grand hotel buffet concerned about playing a decent part in upgrading and spreading a feverish drive to party set up a young music outfit named BINIDU in July 2012 .
Consisting of seasonned professionals, one being the convincing Vincent DUPAS sole master on board of his « you can't help but sing along » tunes project MY NAME IS NOBODY and the 2 others being well-known for strumming and pounding with the muni band PNEU, all of them having gained real support and beaming smiles from any kind of men and women.
This orchestra, vouched for by the ruling bodies of the Music Dancing Department, hunts high and low for the Yes Art, going beyond simply adapting wedding and birthday party standards to head for new horizons of unsuspected creativity. The record you're holding features some of their loudest and most stylised hits and testifies perfectly to the band's genuine thirst for experiments.
The Yes Art comes back to life through Dupas's exquisite and fascinating singing, Jean-Baptiste Geoffroy's exhilarating and naughty drum rolls, through the rollin' and tumblin' of Jerôme Vassereau's delicious guitoune (the party guitar).
What it boils down to according to the lucky bright-eyed young men is the biggest yes-shaped success ever as far as the bamboule concept is concerned.
YES !